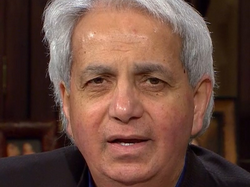 I called to organizers a few days before the conference and asked them if they are really sure he would come (I called the wife of an organizer of this conference, she picked up the phone there). I strongly felt he would not come but they promised and confirmed he would be there.

I told them my feelings but they ensured about the opposite. The information about his coming was on their page even a few days before the conference, even in a moment that they knew he was not going to come. Then he didn´t come. He was on the big screen broadcasting online instead of being personally there. After I called and spoke again and asked them why they didn´t tell it before the meeting for people who wanted to see him personally and arrived sometimes the long distance to see him. some of them with big expenses for hotels and travelling, especially those abroad. They told me they were instructed to do this so by the leading member of the Benny Hinn ministry team for this event. They didn't understand why some people were angry with them.

After speaking to me the lady said she realised finally why there was so much criticism from some people. They alone seemed to be not happy about all of this that happened.

Criticism was there also because, as usual, the strong joining of Benny Hinn ministry with asking people for "sowing seeds" to his ministry.

The illegitimate practice of teaching about money, offerings and gifts

Sometimes I listened and watched Benny Hinn videos and sometimes some things spoke to me. But I saw a video (it should be on the Internet) where he with one other known preacher was speaking. I immediately felt a strong feeling that this conversation and broadcast will be about money, especially about giving money, more specifically, about giving money to that particular ministry. It seemed like some kind of fundraising, only in "spiritual" words. It is not really very prophetic to see it but not all people are sensitive to it. There were times when I only clicked on a video of some preacher and after a few seconds, I saw in my spirit it will be about asking money which comes usually a little later in the model like firstly - you have some problem (usually not in ministry fight, the revelation of God´s will, repentance and so on, but often these kinds of usual people´s needs - healing, family problem or financial problems), then secondly, you need to give money, sow a seed (usually not directly to poor as Jesus primarily was teaching alongside with giving to God, not to your church or to some Godly project you are joining or tight with, but usually to that particular ministry who is speaking in that particular moment). But to ensure you, I personally believe in offerings, helping ministers, churches, particular ministers and also so-called "sawing to ministries" or to God´s kingdom. But not in a way that hyper-prosperity teachings are.

It went so astray that the protagonist even claimed that when you send double seed of some amount of money, you would get double blessings. One of them (the same who raised money together with Benny Hinn in one video) said on another occasion that looking at the packet of money is better than looking at the nice woman (it was not used for revealing flashy thinking, but instead proposing it). It is hardly believed that these kinds of teachings are tolerated in some circles. If you are not in shock and are considering it as possible to be true teachings, you probably are under the influence of these teachings. But to be said to you, that what we used to speak many years (some were angry because of it on us very much), now pastor Benny started to see, at least a little of it.

He later in 2019 made a claim that the "saw one thousand seed" strategy is not good, not according to the bible and God is "fed up" with it. He declared he was wrong in it and that he thinks now it is "an offence to the Lord" and if he hears somebody speak it "He will rebuke them", no matter what the people think of him.

But later in 2020 he again asked people to send to his ministry "not offering, but financial wow" to get the miracle in a week. Promise about the timing of your miracles after "sawing a seed" or  "making a wow/" was in 2019 found by him as wrong. Yes, it is wrong Benny to make this proclamation to whoever sends the money to you. In the time of "repentance" from that doctrine, Benny Hinn called this strategy "buying the miracles".

Prophecies and doctrine (only shortly)

I was taught earlier that prophets can´t speak to doctrines and I agree in terms of "new revelations". Also, we can not change the prophet´s words instead of biblical doctrines and scriptures (it could be very big falls and heresies itself), but It happened to me a few times that God spoke to me about "doctrines". For example about doctrines "all Christians should be millionaires" and "no suffering in the Christian life" I got the word  "false doctrines". It is very obvious in the Scriptures but not people see it clearly.  I agree that doctrines are confronted by biblical truths and we must look primarily and basically to Bible first to see the light, not to prophecies, which alone are the objects of discerning according to Scriptures. But I see, for example in the Book of Revelation (2,14-15) that the prophetic word speaks also to doctrines there. Holy Spirit says that there are some protagonists of some bad doctrines among God´s people there.

I also remind another example about the word regarding one false religion that God spoke to me, I believe: "I hate these teachings".

(This Sunday I was teaching about the edge where we can shift in our teachings from biblical prosperity to hyper-prosperity, which is unbiblical. But it is in the Czech language, maybe I will prepare  teachings about it in English in the future)