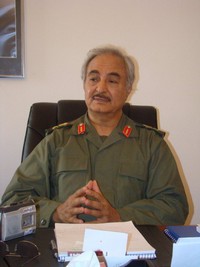 The Government of National Accord by these words will not be a solution for the country. The name of it is better than the reality.

“they will not distribute among themselves” (10 August 2017)

It seems to me, that the process of division and disagreement is going on similarly as from the beginning. At the beginning, after initial government which ruled after fall of Gaddafi, the General National Congress was established in 80% turmoil, but after some actions mostly with Islamist’s influence and a desire of this Congress to rule more time, field marshal Khalifa Haftar took role and organized a revolt with military action called Operation Dignity. It led to a new election with only 18% turmoil. A new parliament body was established, Libyan House of Representatives with its government, but some members of former GNC established the new General National Congress and their own government because they rejected the results of an election. It was backed up with Operation Libya Dawn and the initially elected government had to fly from Tripoli to Tobruk.

The events are more complicated together with other groups and militias, foreign influences and interests of regional states or other powers. A new voting-systems of elections and political agreements either with the UN (Libyan political agreement) or also without the UN (Declaration of Principles) have also its role in all this. It is not the purpose of this article to write about it, but it shall only slightly show the terrible process of distribution power in Libya.  In this process, also another government has arisen by the aim of the United Nations which we spoke about above, the Government of National Accord, likewise other new political bodies President council and Council of State. Each of the rival groups supported, support, stopped to support it or something else and so on still in changing situations.

The situation is still terrible, unsolved and without a clear outlook to a good solution for stabilization of a united country in a peaceful process. Many hundreds of people died or were injured (about 4000 killed now) in this “second civil war”.  Many hundreds of thousands (more than million according to some sources) people have fled from Libya in last years. Armed groups and militias, among them also some fighters of the Islamic state, are present and have their own goals and demands. Conflicts among tribes occur too. Assassinations and kidnaping are taking place among politicians and others there. Libya is now a really injured country. Additionally, Libya has become a big open gate for refugees and emigrants from Afrika to Europe in the last years, with all the problems that it brings.

I believe this last was the word for some Libyan politicians and people. I think that this word isn´t some kind of a pacifist word stopping all important work of an army or police in stabilizing a country, its safety, and peace, but it goes to some who could be in peace but they are not. Evil desires of men to control and rule over people are causing more and more suffering. But as was said you could be at the end destroyed by each other. Somebody had to slow down, somebody had to make a compromise, and somebody had to respect some basics settings of your new state.

I pray for Libya to see God’s people arise and steadily stay there. If you live in Libya and seek piece, God and his ways, you can contact us also to have some fellowship with our ministry and maybe help each other. You are welcomed.