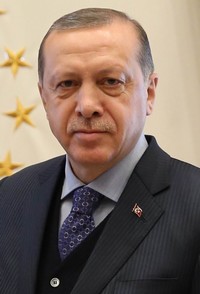 There was a referendum about a presidential system in Turkey this year. We have received a word about president Recep Tayyip Erdoğan on 25. 3. 2017.

"He is not for succeding of a throne designated, but usurbs a power for him through intrigues."

The more power for this president means not only more islamisation of a country but also more power to fight against his opponents whatever circle they are from.

The second one can mean that he is not a man of God's will for this country. The Allmighty can chose for different tasks and different offices different people who are  then the right people of his will for that moment and that work. These people for that particular moment not necessarily must know Him, but still stay the right ones for the particular job in that place for the paticular historical moment . They are chosen by Him, but the people not only needn´t to find this, but can also oppose this election of God.

According to this word, he is not the one the Lord had chosed for this country.

More in this category: « The word about Arab riots called "Arab spring" Angela Merkel and Islam, Germany, Europe »
back to top
FaLang translation system by Faboba

Hello, I am Jiří Joel Krupa. This website is still new and under construction. In past years we had received some prophetic words regarding some countries and some people in the world. Some links here are still without articles but we hope to make everything gradually ready to be here for reading. Please be patient and help us to share these words with countries and people whom they were sent to. Thank you.